November 13, 2010
Buddha established a new religion which changed many societies. Already around 300 BC Buddhism gained political influence. Indian emperor Ashoka the Great established a Buddhist kingdom and based his reign on the Buddhists precepts. 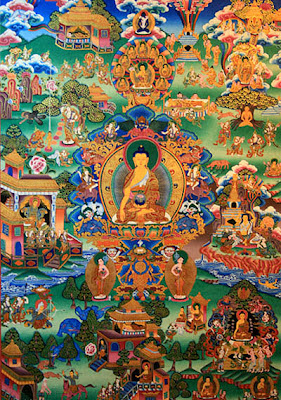 Buddhism spread eastwards and forever changed China, Korea, and Japan. Buddhism wisely explained the human condition and offered consolation other religions did not give. It also introduced a culture of compassion into societies where survival depended on social status and where poverty was cruelly abundant.

But the new religion did not only impacted the society as such. It also changed the political constellations in these countries. And while other strong religions competed for political influence in Chine or Japan, countries such as Thailand, Tibet, or Burma became Buddhist kingdoms.

The entire south East Asia was changed by Buddhism - its philosophy and aesthetics. A monastic culture was established and created not only a new social structure, but also a new ideal. Buddhist ethics permeated the societies in which Buddhism took root.

Finally, Buddhism spread to the West. On the one hand, Asian immigrants brought Buddhism with them and established places of warship. On the other, interested Western travelers and scholars contributed to the popularity of Buddhism and the spread of religion outside of Asia. Entire faculties at many universities were established in order to pursue the study of Buddhism.

Buddhist philosophy, art, and architecture found a new growth. Buddhist psychology and the ideal of ahimsa or non-violence plays important role in some segments of the Western societies as well. A new monastic culture was established and secures a steady flow of ideas between the east and the West.

Non-violence is one of the precepts of Buddhism. It must be said that also there were some violent wars between the followers of different religions (Hindu-Buddhist conflicts in India, Taoist-Buddhist conflicts in China, violent power struggle between various Buddhists sects in Japan), Buddhism never initiated a major war.

Marginally, I would like to also mention the development, the influence, and the popularity of the Japanese martial arts of which Zen philosophy is an inherent element.