Celestite also known as celestine, is a naturally occurring form of strontium sulfate. It is very similar to barite (barium sulfate), but less common. Celestite occurs in sedimentary rock formations, especially in dolomite and dolomitic limestone. Celestite is mined industrially as a source of strontium. It is found in abundance in Sycilly, Avon Gorge near Bristol in the United Kingdom, Put-in-Bay Crystal Caves on South Bass Island in Lake Erie Ohio, USA, and San Bernardino County in California, USA. Considerable amounts are also found in Egypt, Mexico, Peru, Poland, and Tunisia. The most beautiful celstite specimen come from Madagascar. 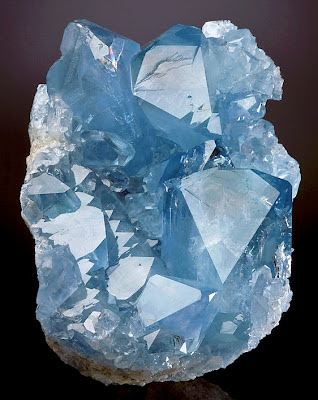 Celestite forms transparent, pyramidal or orthorhombic crystals, nodules, and clusters. It is usually blue, but sometimes it is green, yellow, red, or white. White celestite is usually found with calcite. Celestite displays some pleochroic properties which means that it appears to have different colors when observed from different angles.

Although celestite comes in many colors, it was named after the sky-blue variety. Its name derives from the Latin word caelestis which means heavenly or celestial. In spiritual circles it is believed that this mineral was named celestite because of its ability to promote greater sensitivity to celestial vibrations. The stone is used to assist in astral travel. It is also supposed to help remember dreams and facilitate lucid dreaming. It can be placed in any room to enhance and increase its vibrational energy.

Celestite is a very powerful stone. It emits a very high vibration and can be used to restore the inner balance. It helps to integrate instinct with consciousness. To those on a spiritual path celestite marks the direction, facilitates insight, and helps expand the mind. Celestite has not only the ability to clarify and center the mind, it also purifies the heart. It helps dispel worries, solve conflicts, and restore harmony in difficult circumstances. Relationships that are at the turning point may profit from this properties as the stone seems to create a perfect climate for reflection. It helps to find a creative solution to the conflict and facilitates communication. It helps to think and articulate clearly. Celestite also helps to analyze and comprehend complex concepts. Artists, writers, and musicians may find new inspiration as well as new ways to connect with the outside world.

Thanks to its high vibrational force, celestite is an excellent stone for healing. It helps to heal emotions and opens the heart to love and self-love. On physical plane, celestite helps to reduce the pain and initiate detoxification. It has the capacity to heal the eye and ear conditions. It helps relax stiff and aching muscles. Celestite can be used to cure insomnia since it has the ability to calm the mind and relieve anxiety. Blue celestite is associated with the throat chakra and can be used to alleviate problems in the throat and neck area. The stone opens the throat chakra and balances energy flow there. Celestite has also been used traditionally to heal wounds and to heal digestive disorders. The healing takes place on a quantum level and there is nothing magical about it. We are bodies of energy immersed in vibrational universe and celestite is a perfect energy conductor.

Celestite should be cleansed and recharged from time to time. In esoteric circles it is believed that the best way to recharge it is to expose it to the light of the full moon. Another way to cleanse it is to place it in a bowl full of tumbled hematite stones and let it recharge over night.

Celestite is a beautiful mineral that brings beauty, harmony, and calm to any space. It dispels negativity and increases positive energy. It can be put in any space, but the blue celestite should not be exposed to sunlight as it will fade.

healing properties of celestite by Dominique Allmon is licensed under a Creative Commons Attribution-NonCommercial-NoDerivs 3.0 Unported License.

*This article is for educational purposes only and is not meant to heal or diagnose any
disease.