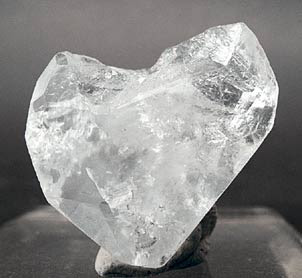 Phenacite occurs as very well formed free trigonal (rhombohedral) crystals, large prisms, or relatively small prismatic wands. It may also form a small clusters. Phenacite is either transparent or milky and comes in different colors. Very often it is colorless, but can also be white, yellow, pink, light red, or even brown.

The name phenacite derives from the Greek word phenas which literally means liar or deceiver. Phenacite earned this name because its growth patterns often resemble other minerals. It is often confused with quartz, topaz, or even tourmaline. When used as gem, phenacite receives the multifaceted brilliant cut and can be mistaken for diamond.

Phenacite is considered to be one of the most powerful minerals that are used in crystal healing. It can be used to assist personal and spiritual growth. The stone appears to open one's mind and speed the progress. Those who use it may experience synchronicity phenomena occurring unexpectedly in their lives.

Phenacite has a remarkable healing potential. It is able to clear, cleanse, activate, and align all the chakras in the body. It increases the vibrational energy and helps the body cells to regenerate. It can be used to heal neural disorders, nerve damage and cerebral imbalance. It activates the third eye chakra and helps to clear the mind and gain the insight. It has the capacity to bring love and positive energy into one's life. Phenacite promotes meditation and permits access to the regions of the mind that go beyond intuition. The healing takes place on a quantum level and there is nothing magical about it.

In esoteric circles the stone is believed to have the power to stimulate the eighth chakra also known as the soul star chakra and to allow access to higher dimensions. The eighth chakra is located within the astral body above the crown chakra. The stone has the capacity to induce powerful dreams and visions and precipitates immense spiritual growth. Sensitive individuals may experience enhanced paranormal activity.

Phenacite is a very interesting mineral. It is rather rare and expensive. The best specimen are seldom found outside museums and private collections. Although its beauty is rather unobtrusive, the power of phenacite cannot be underestimated. During meditation or for the healing purposes phenacite can be used with other crystals. It has the ability to amplify their effect on both, the body and the mind.


*This article is for educational purposes only and is not meant to heal or diagnose any disease.

Healing Properties of Phenacite by Dominique Allmon is licensed under a Creative Commons Attribution-NonCommercial-NoDerivs 3.0 Unported License.