the third turning of the wheel

The turning wheel is a powerful symbol of the mystery at the heart of life. Planets and solar systems and electrons in their orbits are wheels revolving within larger wheels, just as the hours and seasons of day and year rotate too, and the circulation of the blood in the body, and the vast hydrological cycles that sustain our living world. Like the sacred hoop of the Native Americans and the round dances and mandalas of ancient peoples, the wheel reminds us that all is alive and moving, interconnected and intersecting.

This truth flamed at the core of the Buddha's message two and a half millennia ago. When he began to teach, he is said to have turned the Wheel of the Dharma: the law or teaching of dependent co-arising. 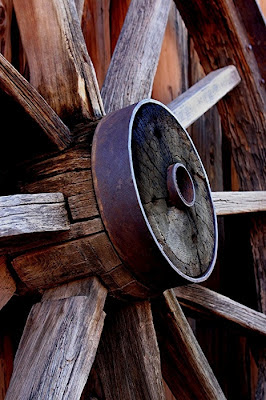 With a wealth of metaphor, story, and philosophic argument, he showed the interdependence of all phenomena. In contrast to thinkers of his time, he saw all things in process, intrinsically connected and sustaining each other in intricate patterns of mutuality. To give social form to this reciprocity at the heart of nature, he inspired the creation of community, or Sangha, for practicing wisdom, compassion, and sharing.

Five centuries later, the Wheel of the Dharma is said to have turned again. The time had come to reclaim and recast in fresh language the Buddha's core teaching, which had become obscured for many by generations of scholastic and analytic thought. With the Perfection of Wisdom sutras, to convey the intricate interexistence of all things, come new terms, like sunyata or emptiness of separate being; new metaphors like "deep space"; a new playful, paradoxical style; and a new model, the bodhisattva.

They call this watershed moment, at the dawn of Mahayana Buddhism, the Second Turning of the Wheel.

n our own time. twenty centuries later, the teaching is proclaimed again. In this dark juncture, when we most need to hear it, when industrial-military power and institutionalized greed bid well to destroy our world, it comes again, as a Third Turning of the Wheel. In this turning the truth of our mutual belonging in the living body of Earth comes framed in fresh language of scientific discoveries, cosmological insights, and resurgent indigenous traditions. In people of all faiths and none, there is an urgency to taste and know this relatedness and break down the dichotomies between self and world, mind and nature, contemplation and action. The survival of conscious life seems to depend on our doing that.

There is no leader or guru at the helm of this revolution, for it arises, of necessity, from below and draws inspiration from the journeys of countless men and women. But I doubt if there is anyone closer to the center of it, or more pervasive in his impact, than Thomas Berry. When he calls us to awaken in Earth Community for the sake of the emergent Ecozoic era, his words reshape our interior landscape. We begin to live into what he has named, and experience our participation in the evolving universe.

As I take the Council of All Beings around the world, and invite people of all backgrounds into similar consciousness-expanding rituals, I know that the "deep cultural therapy" Thomas calls for is necessary and marvelous.

And I honor the exquisite role he plays in the Third Turning of the Wheel.

This Turning, as I experience it, is like what poet Robinson Jeffers called "falling in love outward." Our mission is not to escape from our world, or tune it out, or fix things by remote control, but to fall in love with our world.

We are made for that, because we co-arise with her - in a dance where we discover ourselves and lose ourselves over and over.