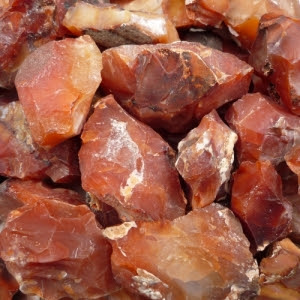 In the Middle Ages carnelian was called carneolus. This name derived from the Latin word carneus which meant fleshy, made of flesh. The French called this gem corneline which probably came from cornele or cornel cherry in Old French.

Carnelian was highly valued in Antiquity and worn as jewelry. In ancient Egypt the stone was used to protect the living and the dead. The Egyptian Pharaohs believed that the stone has supernatural qualities. They regarded this stone as a symbol of renewal and loyalty. An Isis knot or tyet, made of carnelian was placed on the neck of a mummy to ensure safe passage and a peaceful afterlife. An Eye of the Horus ornament made of carnelian was believed to protect from the evil eye.

The Greeks and the Babylonians believed that the stone would bring luck to those who wore it. The Greeks also associated carnelian with the returning sun and used it as ornaments as early as the Bronze Age. For the Romans, the stone was a symbol of courage and power and was worn in rings and signets that were used as seals to seal documents as the wax did not stick to the surface of the stone. The Buddhists in China, India, Nepal, and Tibet use carnelian for protection and often set it with turquoise and lapis lazuli to enhance its powers. This practice was also known in ancient Egypt.

For ages carnelian was considered to be a stone of power, courage, ambition, and inspiration. It is supposed to increase physical energy and personal power. It is a stone of action which is very useful in all decision making processes as it helps to stay focused and motivated. It is a stone of confidence, creativity, individuality, and self-realization. Carnelian helps dispel apathy and indolence. It helps discover hidden talents and awakens curiosity in the people who wear it.

Carnelian is believed to have the capability to protect the wearer from negative energies. It wards off negative emotions such as anger, fear, jealousy, and resentment. It improves mood and helps to deal with sorrow and depression. Carnelian encourages love and friendship. It helps accept the flow of life and takes away the fear of dying. It brings peace and serenity to a troubled soul as it helps heal trauma and emotional wounds.

Carnelian is associated with the root and the sacral chakras. It clears imbalances in these energy centers and enhances the energy flow within the body. The gem helps establish better connection with the surroundings and ground people who meditate.

On the physical plane carnelian is associated with sexuality. It helps awaken passion and balances sexual energies. It helps alleviate disorders of the reproductive system. In folk medicine this mineral was used to heal impotence and fertility problems. Carnelian is believed to relieve menstrual cramps and other problems in the abdomen area. It was used traditionally to heal disorders of the gal bladder, pancreas, and the kidneys. Carnelian is believed to speed up metabolism, warm and cleanse the blood, and stimulate appetite. It can help absorb vitamins and minerals, rejuvenate bodily tissues, increase blood circulation, and accelerate the healing and detoxification process within the body.

Carnelian is a beautiful, sensual stone that can be placed on the body, worn as jewelry or a talisman, taken as gem elixir

*This information is for educational purposes only and is not meant to diagnose or cure a disease.

healing properties of carnelian by Dominique Allmon is licensed under a Creative Commons Attribution-NonCommercial-NoDerivs 3.0 Unported License.