March 06, 2011
Rose quartz is a translucent, often turbid, coarsely grained variety of quartz found mostly in pegmatite rock formations. Its color ranges from pale pink to rich rose red. The origin of this color is not well understood. For a long time mineralogists suspected that it is a result of titanium, iron, manganese or even colloidal gold impurities present in a crystal structure of quartz, but the most recent X-ray diffraction tests suggest the existence of yet unknown, fibrous mineral causing the pink hue in massive rose quartz. 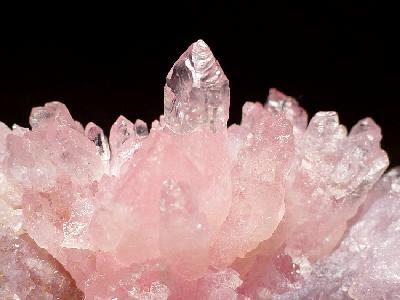 Not much is known about the historical use of rose quartz. Some beads that date back to 7000 B.C. were found in archeological sites of Mesopotamia (present day Iraq). Assyrians used rose quartz to make jewelry. Romans took advantage of the gem's hardness and made seals of property out of it. In the Middle Ages rose quartz was used to decorate royal insignia. It was also appreciated for its magical and healing properties and was regarded as a symbol of gentle love and beauty.

Nowadays, rose quartz is considered to be the stone of love and self-love. It is supposed to gently remove all negativity and self-doubt. It quiets the emotions and brings peace of mind. It gives courage and heals traumatic emotions and emotional wounds. It also reduces stress and soothes the nerves. It brings calm and clarity and restores harmony after chaotic emotional experiences. It may reduce aggression and resentment and bring forgiveness. It can help develop tolerance and restore self-esteem.

This gem is associated with the heart chakra which is the seat of our emotions. It can be used to clear and balance this energy center. It may help us establish emotional connection with others, develop trust, feel empathy, and allow us to experience love and self-love, especially when we think that we do not deserve to be loved.

In esoteric circles rose quartz is used to attract love. Because of its capacity to dispel fear, it is also used to ease the transition of new born babies into their new lives and to aid the dying so that they can peacefully let go of attachments and enter the new realm at the end of their earthly existence.

Like other quartz varieties, rose quartz is characterized by high conductivity. This quality makes it a perfect and powerful healing stone. It is often used to strengthen the heart and improve blood circulation which helps detoxify the body and has an overall rejuvenating effect. The gem can help heal scars and improve complexion. It is also believed to energize the gonads and increase fertility.

Rose quartz can be used in crystal therapy, worn as jewelry, or taken as a gem elixir. It is attractive enough to adorn spaces. Its peaceful energy helps fortify and heal relationships and dispel negativity from areas where people interact. The gem is believed to clear electromagnetic radiation and should be placed near computers and TV sets. It must, however, be cleansed and recharged very often since it absorbs negativity.


*This information is for educational purposes only and is not meant to diagnose or heal a disease.