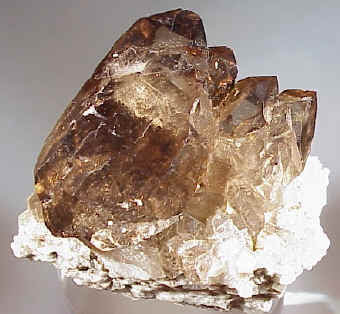 The name smoky quartz derives from the smoky color that ranges from grayish-brown to dark brown and even black. The smoky color results from natural exposure to radiation. It forms from free silicon that was released from silicon dioxide during the formation of crystals. Smoky quartz is a rather prevalent mineral that is mostly mined in Colorado, USA, in Brazil, Australia, Madagascar, Switzerland, and Scotland where it is considered to be a national gemstone.

Since ancient times smoky quartz was used in many cultures because it was rather easy to cut it to gems and ornaments. This beautiful crystal was considered sacred by the Druids. In shamanic cultures smoky quartz was used in rain gathering ceremonies. The gem was often found on top of the ritual wands used by some of the North American native tribes, especially the Cherokees. Smoky quartz was also popular for making snuff bottles in ancient China. Ancient Romans used it for carving intaglio seals.

In esoteric circles smoky quartz is regarded as a grounding stone providing physical and psychic protection from negative energies. It can help remove negative energy and transform negativity of any kind into positive energy. It can be used to

Smoky quartz is considered to be a stone of abundance and a luck bringer. In difficult times it helps enhance the survival instinct and determination as it keeps one's mind focused on success and the realizations of personal goals and dreams. It enhances intuition and promotes personal pride and joy.

It helps elevate mood and gently remove emotional blockages. It can transform negative emotions such as fear, anger and jealousy into positive energy. It helps clear mental clutter and promotes focus. It brings calm and serenity and helps relieve grief and depression.

Smoky quartz is considered to be a perfect stone for meditation as it helps refine the vibratory energies within body and create clarity of the mind thus facilitating access to subconscious wisdom. It grounds during the meditation and facilitates alignment between the lower and higher selves. It activates the flow of the kundalini energy and enables access to higher states of consciousness.

The gem is associated with the root chakra and is, therefore, believed to promote physical health of organs of the abdomen including stomach, kidneys, adrenals, pancreas, and the reproductive organs. It can help alleviate pain in hips and legs and even cure headaches. It promotes detoxification, regulates body fluids and facilitates the healing process.

For healing purposes smoky quartz crystals can be placed on the body, especially where pain is experienced. To reduce stress it is suggested to hold a crystal in each hand and sit quietly for a few moments.

This amazingly beautiful mineral can be placed in any room of the house to purify and balance the energies. For best results make sure that you purchase natural smoky quartz crystals. Artificially irradiated crystals are dark and opaque and may not bring the same healing results.

*This information is for educational purposes only and is not meant to diagnose or cure a disease.

*It's still a common practice to artificially irradiate colorless quartz and sell it as smoky quartz. On big fairs, dealers are obliged to clearly label that quartz accordingly, but it's impossible to tell whether the source of the irradiation was natural or not just by looking at the crystals, so some dealers don't do that and get away with it. In the U.S.A. a lot of produce gets irradiated with gamma rays as a means of sterilization, and a box of white quartz just needs to be put on the same conveyor belt as the tomatoes for a couple of times. Often the dealers overdo it and the crystals turn out suspiciously black.