the philosopher of kindness

This is my simple religion. There is no need for temples; no need for complicated philosophy. Our own brain, our own heart is our temple; the philosophy is kindness. - HH Dalai Lama

Jetsun Jamphel Ngawang Lobsang Yeshe Tenzin Gyatso, usually shortened to Tenzin Gyatso (July 6, 1935) is the 14th Dalai Lama, a spiritual leader revered among the people of Tibet. He is the head of the government-in-exile based in Dharamshala, Himachal Pradesh, India. Tibetans traditionally believe him to be the reincarnation of his predecessors. 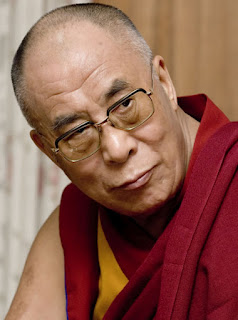 The Dalai Lama was the fifth of seven surviving children to a farming family in the village of Taktser. He was proclaimed the tulku or rebirth of the 13th Dalai Lama at the age of two. In 1950 the army of the People's Republic of China invaded the region. One month later, on 17 November 1950, he was enthroned formally as Dalai Lama: at the age of fifteen, he became the region's most important spiritual leader and political ruler. In 1951 the Chinese military pressured the Dalai Lama to ratify a seventeen-point agreement which permitted the People's Republic of China to take control of Tibet. He fled through the mountains to India soon after the failed 1959 uprising, and the effective collapse of the Tibetan resistance movement. In India he established a government-in-exile.

The most influential member of the Gelugpa or Yellow Hat sect, he has considerable influence over the other sects of Tibetan Buddhism. The Chinese government regards him as the symbol of an outmoded theocratic system. Along with the 80,000 or so exiles that followed him, the Dalai Lama strives to preserve traditional Tibetan education and culture. He has the remarkable capability to understand the need of reconciliation of different faiths and religions. Kindness is his chosen path.