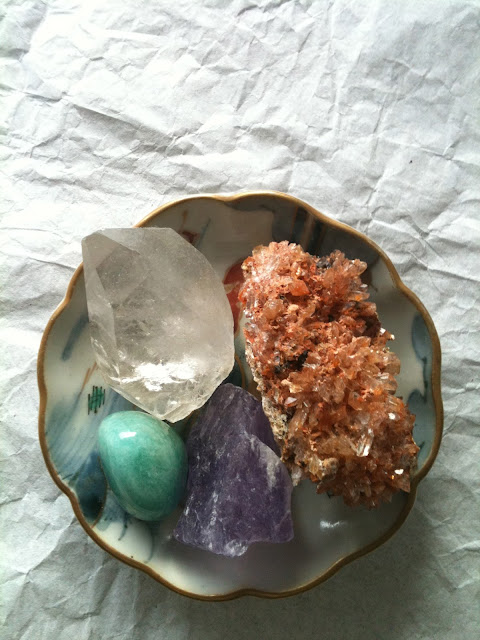 Gems and crystals fascinated people since the beginnings of humanity. Their beauty was only one aspect that attracted attention of our ancestors. Most importantly, they discovered their magical powers and learned how to apply their healing properties. Over the ages gems became a vital element of the holistic approach to health.

Gems were used for healing in many cultures. We find them in the Stone Age cultures, in ancient Egypt, China and India. We read about them in Old Testament and in works of Aristotle and find prescriptions in Middle Ages.

The modern crystal therapy is based mostly on the work of the Medieval abbess Hildegard of Bingen who systematized crystals and their properties and incorporated gems into a holistic health concept. She used gems and crystals both, externally and internally: the healing stones were either placed on the body or used in preparation of elixirs that were to be ingested by the patients. 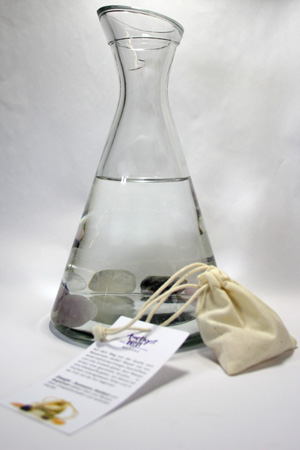 To make a gem elixir simply place cleansed gems - raw or tumbled - in a glass carafe and pour in spring or purified water. Cover the carafe with a piece of gauze or cheese cloth an allow it to rest for a whole night. The elixir is ready by the morning and can be used internally or externally in sprays, compresses or lotions. It is sensible to make a small amount rather than to store large batches of elixirs as the healing effect diminishes with time.

Some people prefer to make a gem essence which has an alcohol as its base. I personally prefer to use energized water. To make a gem essence place a cleansed gem in a glass bowl and pour a small amount of water to cover the gem. Expose the bowl to a direct sunlight for 2 - 3 hours. Some people leave the gem in water for the entire day and night cycle believing that it is necessary to expose it to the energies of the Sun and the Moon. Follow your intuition.

To make a "mother essence" use a small Miron violet glass bottle (50 ml or ca 1,7 oz). Fill the bottle half full with clear organic brandy. Fill the other half with the gem elixir. Use the "mother essence" to make the gem essence for your daily use: fill a small dropper bottle with a half and half mixture of water and alcohol. Add up to 10 drops of the "mother essence". Shake the bottle to energize the mixture. Take 3-5 drops of the elixir several time a day. For best absorption place the liquid under your tongue.

Holistic doctors skilled in gem therapy suggest that in order to alleviate ailment or condition a person has to drink at least three glasses of gem water per day for at least two weeks. In this way the energetic information stored in gems and crystals can be incorporated in our own energy system.

While choosing crystals you will have to consider the health condition you wish to improve. Choose crystals according to their healing properties and remember that they can be used in combination with other crystals to enhance the healing effect.

Many gems can safely be used in gm therapy. However, certain gems are toxic and should never be used in making a gem elixir. If you are not absolutely certain about the stones you are using, ask a certified holistic therapist or a gemologist.

Gems not to be used in elixir making:


The healing properties of a gem elixirs depend on the gems and crystals used in their preparation. Healing stones transfer their vibration to the molecules of water thus changing the energetic pattern of this medium. This patterns are then incorporated into our own energy field. The healing process is gradual and requires patience and perseverance as the changes must take place at the molecular level before they manifest themselves on the macro scale.

*To cleanse gems immerse them for several hours in a Celtic salt bath. Rinse with spring or purified water to remove the traces of salt.

*Gems can, of course, be used over and over again. To make a new batch of gem elixir place them for a few hours on a large quartz crystal cluster or in a direct sunlight.

*Miron violet glass offers optimal protection from harmful effects of the ultraviolet light. If you cannot obtain one, use brown glass bottles and store them in a dark place.

*This article is for educational purposes only and is not meant to diagnose a cure a disease. Caution is advised as the gem therapy is not accepted by the school medicine. If you are sick or suffer from a health disorder, please contact a certified holistic health practitioner before beginning gem therapy.

how to make a gem elixir by Dominique Allmon is licensed under a Creative Commons Attribution-NonCommercial-NoDerivs 3.0 Unported License.