May 05, 2015
Amazonite is a silicate mineral from a feldspar family of minerals that share  similar crystalline structure and chemical composition. 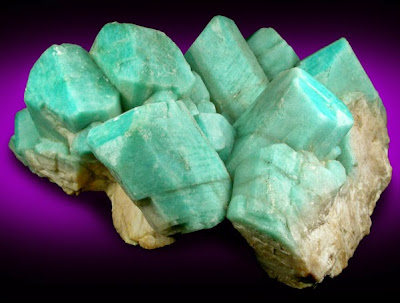 Amazonite forms short prismatic or tabular crystals and masses. Its color ranges from light blue, blue-green, turquoise to light green with white or grayish veins. Latest research suggests that the blue-green color derives from small quantities of lead and water in the feldspar and not from copper as was previously assumed.

Amazonite is rather rare and is usually mined in the USA, Canada, Mexico, Russia, India, Mozambique, Namibia, Brazil and even Austria.

Amazonite was known in Ancient Israel. It is believed that the green stone in the High Priest Aaron's breast plate was in fact amazonite and not emerald.

Ancient Egyptians also used the stone to induce fertility and to attract luck and good fortune. Artifacts made of amazonite were discovered in King Tutankhamun's tomb. 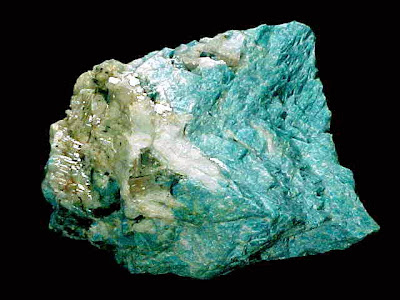 Amazonite is sometimes called the Stone of Courage or the Stone of Truth. It is believed that the stone encourages its wearer to self-discovery and the search for truth within one's heart. It reinforces self-discipline, courage and integrity, and helps one to live free from the judgement of others. It facilitates free communication and expression of feelings, and encourages empathy and a peaceful resolution of conflicts.

On the spiritual plane, amazonite balances the male and female energies. It also helps align all chakras and strengthens the heart and the throat chakra thus allowing undisturbed flow of feelings and truthful speech.

Amazonite has a great healing potential. The stone is believed to have the capacity to absorb the radiation from cell phones and the microwave ovens, and protect its wearer from electrosmog. People who spend long hours working on computers should place it near their device.

It is believed that amazonite has the potential to calm the nervous system. It harmonizes body and mind thus leading to well-being and health. Inner conflicts can be resolved and emotional balance restored. Amazonite can calm trauma and dispel fear. It reduces stress and can help induce peaceful sleep.

On the physical plane, amazonite is believed to help heal problems associated with metabolism. If used as an elixir it can help with osteoporosis, tooth decay and muscle cramps. It can help correct calcium deficit in the body.

To enhance peaceful communication this beautiful stone should be placed in places where people interact together, such as living rooms, bedrooms and offices. Placed in the workplace, the amazonite helps dispel negativity and aggression. As a stone of good luck and prosperity it may even help to grow the business since it can attract new customers.

*Information in this article is for educational purposes only. It is not meant to diagnose or cure a disease.

healing properties of amazonite by Dominique Allmon is licensed under a Creative Commons Attribution-NonCommercial-NoDerivatives 4.0 International License.