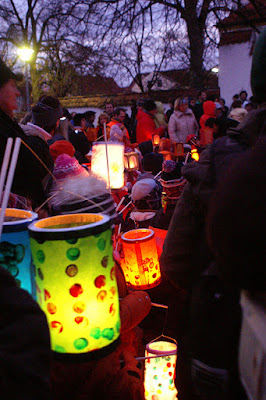 St. Martin's Day or Martinstag is celebrated on November 11. It is a religious observance in Germany that is very popular with children. It is dedicated to St. Martin of Tours, or Martin le Miséricordieux, and celebrates modesty and altruism, values that are commonly associated with Saint Martin.

St. Martin is known as a friend of children and patron saint of beggars, wool weavers, soldiers, vintners and innkeepers, and the geese.

The celebrations usually involved evening processions with handmade paper lanterns, but the celebrations were suspended in 2015 in order not to offend the migrants from the Middle East.

This holiday was traditionally followed by a fast that lasted until Christmas, so normally St. Martin's Day would center around good food. Martin's Gans, or the roasted goose served with dumplings and fragrant red cabbage stew, is one of the many dishes that people in Germany enjoy on this day.

History of the tradition

"Saint Martin of Tours (316 - 297 CE) initially worked as a Roman legionary but was later appointed the third Bishop of Tours. According to lore, he was a modest and altruistic man. The legend about his saving a homeless person from freezing to death by giving him half of his cloak is known to children in all parts of Germany.

The tradition to eat a goose (today often replaced by a duck) on St. Martin's Day is thought to be based on the medieval tax system. November 11 was pay day, and often the tax debt was paid with a goose. It is believed that this is also the reason why geese play such an important role in legends about the Saint. Another popular story is about a flock of geese who betrayed Martin's hiding place as he was trying to hide from the people of Tours when they wanted to make him a bishop."

Quoted from time and date